Almost in the center of Anatolia, which forms a compact plateau area at an altitude of some 1000 meters above sea level extending from the Aegean coast to the Black Sea in the north and the outliers of the Taurus in the south, is the region known to the Assyrians as Katpatuka and in classical times as Cappadocia. Although the exact boundaries of the region varied over the centuries its essential nucleus was always the same. This area (Fig. 12,14), bounded on the south and east by a line of volcanic structures with Erciyes Dag (Mt Argaeus, 3916 m.) at one end and Hasan Dag (3253 m.) at the other, extends north in a series of deeply indented valleys which run down towards the middle valley of the Kizilirmak (Red River) and westward to the depression of the Tuz Golu (Salt Lake).

The most striking feature of the landscape is the volcanism which has created dramatic morphological contrasts and produced a wide range of features, from the spur of volcanic cones to the sciare on the lower slopes and the extensive plateau of lava flows. It is a typical example of an area of recent volcanic activity, with the geological structures perfectly preserved, including both the basic features and the whole range of secondary craters and the pyroclastic deposits associated with them.

After the initial volcanic convulsion, the action of atmospheric agencies led to the formation of a dense and intricate pattern of valleys, ravines, and gullies diversified by a variety of individual features-rock clefts and cavities, free-standing stacks and isolated pinnacles. Climatic factors have also produced a range of contrasting colors which enhance the picturesque effect, and the processes of oxidation, acting differently on different types of rock, have added to the variety of pattern. The rough-textured violet-toned andesites, the smooth ochreous rocks, the white tufaceous cliffs in the valleys, the hillsides of gray ash and the black pillars of basalt combine to form an alternating pattern reflecting the upheavals which the landscape has undergone since the rocks were first laid down.

The variety of scenery which results from Turkey’s mountain structure is still further accentuated by climatic differences. Although each natural region has a climate of its own, these climates can be classified into a number of different types: a temperate climate in the Black Sea area, a Mediterranean climate along the Aegean and the south coast, a continental and sub-desertic climate in the interior, a mountain climate in Eastern Turkey. The area with which we are more particularly concerned, situated centrally in relation to the plateau, has, in general, a continental and sub-desertic climate, with local variations according to the height and structure of the bills. There is a transition from the sub-desertic conditions of the Salt Lake depression to the continental climate of the plateau between the Salt Lake and the Kızılırmak and the main volcanic mountain ridges.

The highest snowfall is in the months of December, January, and February; the main rainfall occurs in March, April and May, reaching its maximum in May. The period of lowest rainfall is in July, August, and September. Humidity follows a similar pattern, with the highest levels in the winter months and the lowest in summer. The highest temperatures are attained in the period from May to September, with sharp fluctuations during the day.

The vegetation pattern is closely related to climatic differences and the nature of the soil. In the Salt Lake area vegetation is almost completely absent, such plants as there are being of desert species; on the plateau, the vegetation is of steppe type, with a few stunted trees. The ridges of volcanic rock are usually without vegetation, but the granites and limestones have a sparse growth of conifers. The tuffs along the sides of the valleys and in the basins offer favorable conditions for the growing of vines.

The hydrographic structure of Cappadocia comprises three main catchment areas – to the north the Kizilirmak basin, to the south-west the basin of the Melendiz Suyu, to the south-east the Mavrucan basin. The Kizilirmak basin is drained on the right bank by a small number of mountain streams, the most important of which are in the area between Kirsehir, Mucur, and Hacibektas. The slopes on the left bank, however, have a much more elaborate drainage system, thanks to more favorable lithological and structural conditions. Among the numerous tributaries on this bank the most important are the Cirdikinozu Dere, flowing down from Kara Dag; the Acısu Çay, coming from the Erdas Dag massif near Nevsehir; the Damsa Cay, which flows past Urgup and is fed by various streams coming down from Avla Dag; and the Karasu, a substantial river which drains the northern slopes of Erciyes Dag.

The Melendiz Suyu drains an area of some 2000 km². on the northern slopes of the Hasan Dag and Melendiz Dag massifs and flows on to provide abundant irrigation for the Salt Lake plain. The Mavrucan Cay drains the southern slopes of Avla Dag and Kara Dag.

The tributaries of these three rivers are mainly mountain streams whose flow is regulated by seasonal variations in rainfall and other precipitations; and this factor, combined with the lithological characteristics of the rock (mainly pyroclastic deposits), has led to a high rate of erosion and transport of material, producing considerable deposits of detritus and a progressive deepening of the valley.

On the basis of the morphological characteristics of the region we can identify a number of broad categories, each of which can in turn be divided into subsidiary types:

The District of Mountain Ridges

Along the northwestern boundary of the region, a number of long rounded mountain ridges rise out of the plateau, running from north-west to south-east. These are ancient crystalline rocks which have been reduced by a long continuing process of erosion to their present rounded form, with gentle gradients and regular slopes. The average height is about 15001700 m.

The District of Lakes and Plains (1)

The Salt Lake (Tuz Golu) depression, at an altitude of 900 m., is the main enclosed basin in Central Anatolia. The lake and surrounding plain occupy a large area extending south-east from Pasa Dag by way of Aksaray to the Melendiz Dag massif. The scree slopes around the lake separate it from the undulating plateau country of the surrounding area. To the west of Aksaray the alluvial plain, mostly composed of deposits of earth and sand, slopes down from 980 m. to 900 m. (the level of the lake) over a distance of 40 kilometers.

The southeastern part of the region has a girdle of volcanic cones running across it from north-east to south-west for a distance of over 250 km., with five main peaks. Erciyes Dag, rising to a height of 3000 m. above the depression round Kayseri, is a large volcano of mixed polygenic structure, with concave Ranks covered with extensive lava flows. Develi Dağ, to the south of Erciyes Dag, is a group of pyroclastic cones some 2000 m. high covered with thick beds of basalt. Melendiz Dag, 100 km. south-west of Erciyes Dag consists of a group of andesitic and pyroclastic cones, much altered by hydrothermal solutions, ranging in height between 2500 and 3000 m., and overlaid with a radial system of basalt flows from a number of secondary craters. Keçiboydoran Dag is a westerly extension of Melendiz Dag, smaller in size but of similar structure. Hasan Dag, at the western end of the region, rears its conical bulk to a height of 3253 m., rounding off the chain of volcanic formations with its five principal peaks and numerous subsidiary cones. The district of the ancient plateau (3)

To the east of the Salt Lake basin is a large plateau area, at heights ranging between 1000 and 1500 m., extending for a distance of over 200 km. to the Kizilirmak valley. The great sheet of tufaceous rock, with only slight undulations, which gives the area its predominant tabular pattern, represents the phase of depositional equilibrium of the ancient plateau. In consequence of various structural movements, part of the area acquired a different slope towards the Kizilirmak and there were secondary episodes of volcanic activity in the Acigol area. At this point there began the series of erosion processes, due to the action of atmospheric agencies, which produced the present morphological -differentiation. A number of sectors with common characteristics can be distinguished, taking account only of the most significant features:

Residues of the Ancient Plateau (3′)

In the middle of the plateau area, where the erosive action of the mountain streams flowing down to join the main rivers has not yet made itself felt, are a number of outcrops of tabular formations, giving evidence of the height attained by the pyroclastic deposits.

These are the valleys containing the main rivers, which played the principal part in the continuous remodeling of the ancient plateau. The Kizilirmak valley is the one with the widest range of morphological features, enabling us to observe the whole process of erosional activity, from its initial phases in deep narrow valleys like those of Zelve and Goreme to broad open graded valleys with the characteristic isolated pinnacles known as peribacaları (“fairy chimneys”) surviving as reminders of the original rock cover.

Fig. 13 Transvers Section of the Region

A) Area predominantly of disintegration

B) Area of medium erosion
(disintegration, hydraulic action and transport)

1- District of lakes and plains 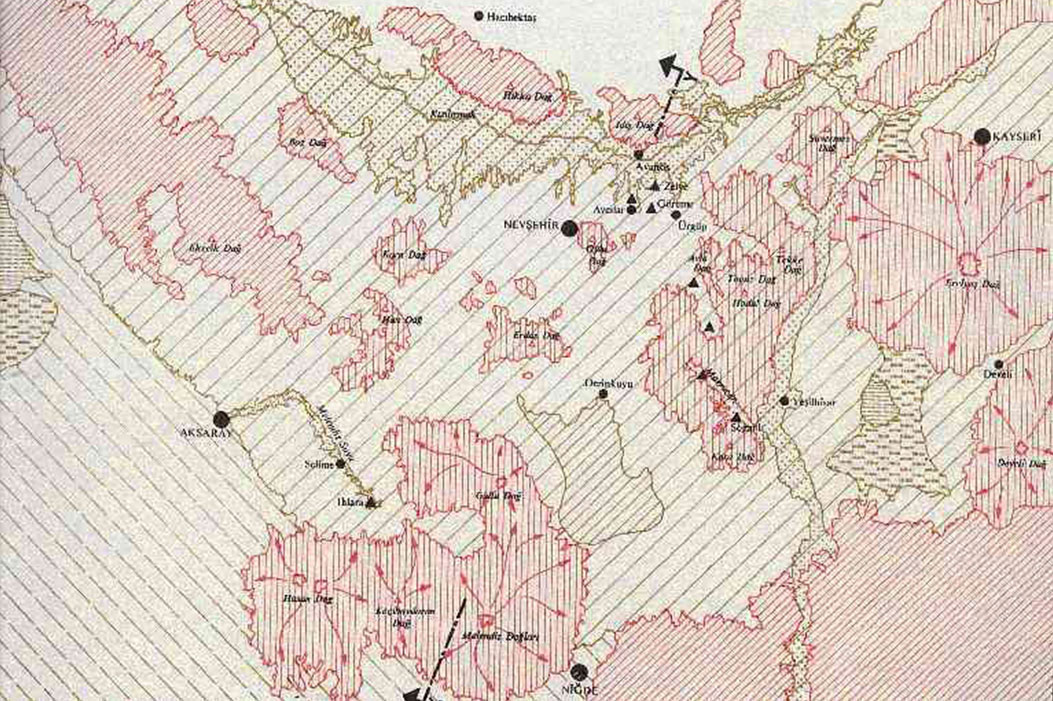 The alignment of the minor volcanic cones between Incesu, Nevsehir and Ortakoy corresponds to the line of the watershed between the basins of the Kizilirmak and the Melendiz Suyu. These are features of relatively low elevation, much eroded, which in some places can easily be confused with the residual outcrops of the ancient plateau, as at Acıgol.

Between the residual outcrops of the ancient plateau and the secondary volcanic cones, at fairly high altitudes, are a number of shallow valleys quite independent of the main hydrographic network. These are mostly closed basins eroded by rain-wash, usually occupying cavities in the rock structure, as at Derinkuyu.