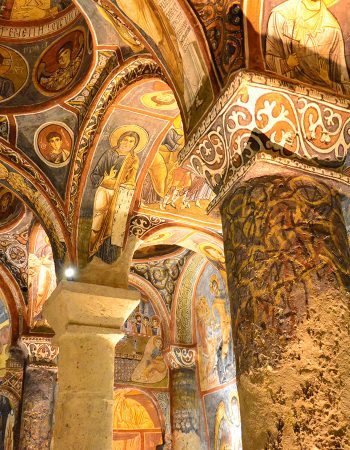 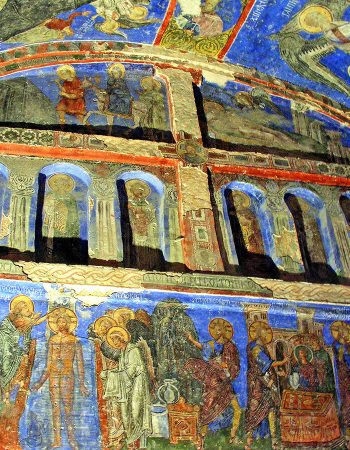 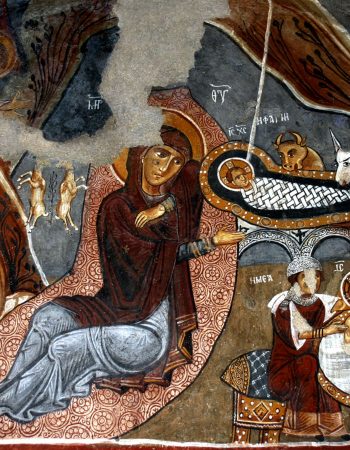 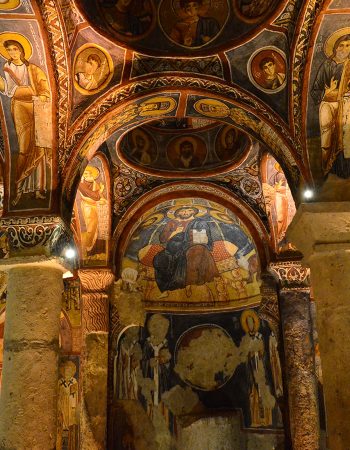 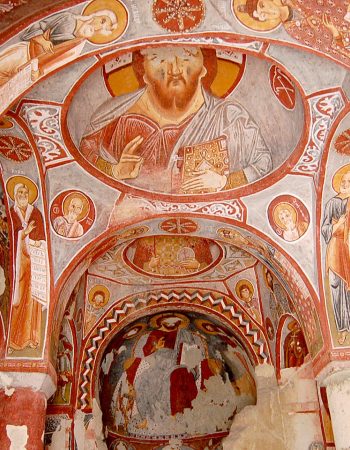 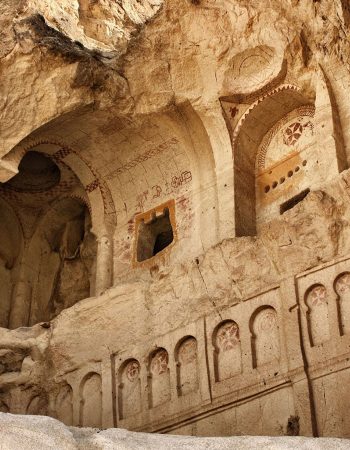 The Goreme Open-Air Museum resembles a vast monastic complex composed of scores of refectory monasteries placed side by side, each with its own fantastic churches. It is obviously the first sight to be visited by any traveller in Cappadocia, standing as it does in the very centre of the region with easy access from all directions. It contains the finest of the rock-cut churches, with beautiful frescoes whose colors still retain all their original freshness. It also presents unique examples of rock hewn architecture and fresco technique.

The area covered by this Open-Air Museum forms a coherent geographical entity and represents a historical unity. There are eleven refectories within the Museum, with rock-cut churches tables and benches. Each is associated with a church. All the churches of the Museum belong to the mid to the late 11th century. These churches can be divided into two groups according to the workshops which executed them: the Column group and the Yılanlı group.

The Yilanli group includes the Yilanli Kilise, the churches of St. Barbara and St. Catherine. In these churches the panels of paintings are separate from each other, ie. they do not follow a continuous scheme. Most of them have narthexes which function as a funeral room.

There are at least 18 churches and chapels in the Museum area. Some have fixed metal grills at the entrance for safety reasons.

The small sizes of the churches conform to St. Basil’s emphasis on the necessity for small monastic units. The extraordinarily rich interiors provide an amazing contrast to the very simple exteriors. The churches are named, throughout Cappadocia, after characteristics attributed to them mostly by the local Turkish population.

Your entrance ticket is also valid for the Tokalı church, located outside the Open-Air Museum. The normal way of visiting the Museum is by proceeding along the path in a counter-clockwise direction. This route is carefully labelled. Beginning with the Nun’s Convent you will proceed to the St. Basil, Elmali, St. Barbara and Snake churches, the Refectory, the Karanlik and the Carikli Church.

It is a complex made up of 4 main chambers. The entrance to the New Church having a rectangular plan with longitudinal axis is made through the barrel-vaulted single-naved Old Church. This rock settlement is divided with arches into three sections. Containing the most important samples of paintings, the building has been decorated in various periods. In the Old Church section, frescoes dated to early 10th century, painted in bands of rich red and green, represent scenes from the Bible. The indigo dominating the main chamber frescoes in the New Church, is a feature discerning the structure from the others. Among the rock churches in Cappadocia, Tokalı has the best paintings narrating the life of Christ in most detail. The church is decorated with the Infancy (childhood of Christ), Ministry and Passion cycles, with several episodes from the life of St. Basileios.

One of the most prominent buildings in the area with its vivid colors, the church is a groin-vaulted structure with cross-in-square plan, having four columns and a central dome. It has beautiful frescoes dating to the 11th and 12th centuries. And where these have fallen off, you can see simple red-painted ornaments from the iconoclastic period. The frescoes are narrating scenes from the Bible and the life of Christ, the Hospitality of Abraham and Three Hebrew Youths. The building derives its name from the apple orchard collapsed a long time ago, in front of the main entrance.

Situated right behind the Elmali Kilise, the church dating to the first half of the 11th century, is a cross-in-square building with two columns and crosswise barrel vaults. The walls are decorated with red-painted ornaments and symbolical figures. There are panels of Christ in the main apse, and St. George and St. Theodore Killing the Snake painted on the wall opposite the entrance. Right next to it, is a fresco depicting the Virgin Mary embracing Christ. The church takes its name from the description of St. Barbara.

It has a longitudinal plan, consisting of two chambers. The front section is barrel-vaulted, while the back one has a flat ceiling. The red ochre ornaments imitate hewn stone plait. Frescoes dated to the 11th century, are painted directly on the wall. Opposite the entrance, there is Christ with a book in his hand, and at his left, on both sides of a large cross, are Emperor Constantine and Helena. Right next to it, the Killing of the Snake by St. George and St. Theodore is depicted. On the opposite wall, Onophrios can be seen with a sapling in front of him, also the Apostle Thomas, and the founder of the building, St. Basileios holding a book in one hand and sanctifying with the other.

It is one of the best buildings with well preserved frescoes. The structure is a cross-in-square church, with four free-standing columns. Scenes from the Bible do not follow chronological order here, contrary to the practice in other churches. Annunciation, Journey to Bethlehem, Nativity, Baptism, Transfiguration, Rising of Lazarus, Entry into Jerusalem, Last Supper, Betrayal, Crucifixion, Women at the Empty Tomb, Anastasis and Ascension scenes are more vivid, effective and detailed than elsewhere. The church takes its name from its very dark interior- this peculiarity being the reason of well preserved frescoes dating to the middle of the 11th or early 13th centuries. The building has been under restoration in recent years.

Situated behind the Dark Church, the front section of the building, accessible through some iron steps, has collapsed. The church has a cross-in-square plan with two columns, and crosswise barrel vaults. Frescoes dated to the 11th century depict Nativity, Baptism, Adoration of the Magi, Rising of Lazarus, Entry into Jerusalem, Betrayal, Crucifixion, Transfiguration, Women at the Empty Tomb, Anastasis and Ascension. Even though other frescoes resemble similar examples in the Elmali and Karanlik Churches, the Hospitality of Abraham, is a feature not likely to be found in other churches. Its name derives from the sandal-like (carik) traces under the Ascension scene.

In the area between the Yilanli and Karanlik churches, there is a labyrinth of monks’ cells and communal halls, together with the nameless church or the Chapel of the Tombs.

With a burial chamber for orphans, and the Goreme Chapel with an inscribed-cross plan. The entrances are closed from time for reasons of security.

The most interesting structure in this area is the large refectory, probably the best of its type. On the left, we see a long table and benches carved into rock ending in a concha which probably contained a fresco of the Last Supper. On the ground there is a large receptacle for pressing grapes. On the walls there are small niches serving as cupboards or as stands for oil-lamps. The refectory is connected to a kitchen and storerooms.

When leaving the refectory, we see the entrances to another refectory, a cavity and a chapel with four columns.