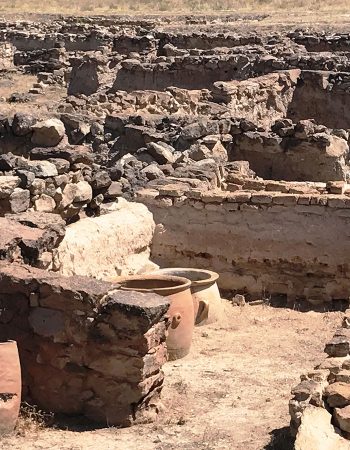 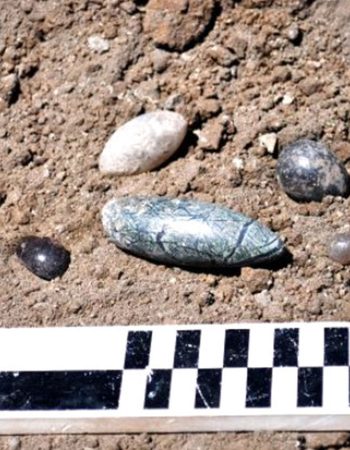 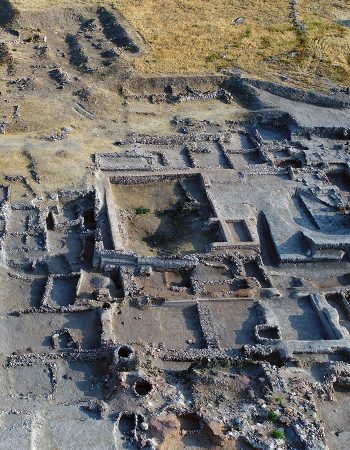 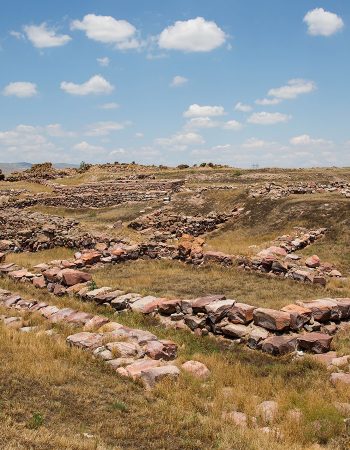 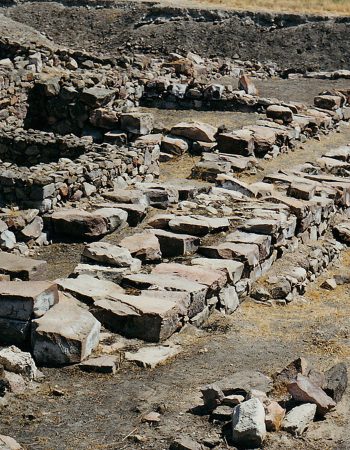 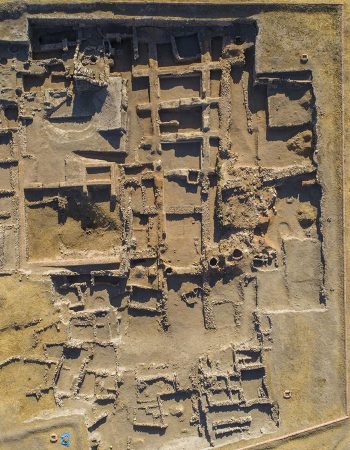 The Settlement of the Assyrian Merchants

The impression of Kultepe, showing the compound (Karum) used by Assyrian merchants for their mule trains, situated below the fortified city of Prince Kanis. The building on the right is the headquarter of this trade organization, while behind it there is Mount Erciyes.

One of the most important ancient sites in Turkey is situated at Kultepe, which has been successfully excavated by Professor Özgüç since 1948. The numerous finds of exquisite beauty and considerable historical value which were brought to light in Kultepe, are among the Map of Kültepefinest works of art exhibited in the Ankara Museum. The following description has been prepared by Professor Özgüç.

The site is situated 20 km north-east of ancient Mazaka, called Kayseri in modern times. Here was established the capital city of Cappadocia on the main route that formerly connected the east and the west. Situated in the center of the fertile Kayseri plain, Kultepe, one of the largest ruins of ancient Anatolia, is composed of two main sections. The mound which is 20 m higher than the level plain and which has a diameter of 500 m, forms the first part; the second part is an area, 1500 m. long and 1000 m wide, which covers the trading center built on the north-eastern, eastern and south-eastern rims of the mound.

The stone foundation of the houses in karum generally came as far as the floor and supported walls made of adobe The upper walls were strongly built with timber posts in the adobe walls of the rooms and horizontal timber beams above the stone foundation indicating that they supported a second storey. The floors are of beaten earth, dark in color and oily in appearance.

The primary importance of the site, in relation to history, is it’s being the site of the earliest Anatolian written documents. The first appearance of Anatolia into the light of history was in this era and through these documents. The clay tablets were written in an ancient Assyrian dialect, using the cuneiform script.

At the beginning of the 2nd millennium BC, Anatolia enjoyed one of the most prosperous periods in its history. The Assyrians who inhabited Northern Mesopotamia established great trading outposts in Anatolia which they called Karums. Among these, the Karum of Kanesh was the controlling center to which all the other Karums were subordinate; in its turn, it was directly connected to Assur. Using routes through Assur-Diyarbakır-Malatya-Kayseri, or Assur-Urfa-Adana – the pass of Kulek, Assyrian merchants imported tin, garments, and cloth by means of caravans of 200-250 donkeys, and sold their goods to the native people, in exchange for good and silver.

Cappadocia in the 2nd mill. BCThe Assyrians did not exercise power or influence of a political or administrative nature in Anatolia. To the local princes who ruled Anatolia at that period, the merchants were obliged to pay taxes, in return for a guarantee of safety. The majority of the written documents are commercial, economic and legal in nature; in addition, there are some historical and literary texts. The envelopes in which these letters, contracts or deeds were placed, bore cylindrical seal impressions, belonging to such people involved in these business transactions as the lender, the borrower, and the witnesses. In this manner, the habit of using cylindrical seals, widely practiced in Mesopotamia, where they constituted the native craftsmen to create very evolved examples of this branch of art and to develop a native style.

The natives and the princes of Kanesh inhabited the mound, while the foreign traders lived at the Karum, which was somewhat in the nature of a lower city. However, the Assyrian merchants mixed with the natives, and intermarriages took place.

Karum, The Settlement of the Assyrian Merchants

The Karum occupies four building levels, the last of which occurs in two phases. In Level IV, which is the earliest and which is built on virgin soil, and in the subsequent Level lll, writing is unknown. The most advanced phase called the Assyrian Trading Colonies Age in Anatolian history is represented by Level II and dates approximately from 1950 to 1850 BC At this level, quarters were formed by a close arrangement of regular buildings around squares and streets. The house has stone foundations and mud-brick walls; wood was also used extensively as a building material. The houses are spacious in their accommodation. The majority have 3-4 or 5-6 rooms and a wide hall.

The archive-rooms are separated from the living rooms, which, in their turn, are distinct from the bedrooms, the kitchens, and the storerooms. By means of the archives, it is possible for us to learn the owners’ identities, and to establish their Assyrian or native origins. The great fire which destroyed the city barely allowed the inhabitants to escape with their lives, and to save what they had on their persons; all kinds of household utensils, marvelously evolved pottery, animal-shaped drinking cups and statuettes were abandoned, waiting for future discovery. The houses of this level, which had one or two storeys, were uncovered in good condition; this has considerably simplified the task of reconstructing the site. So far, 15.000 tablets and envelopes have been discovered at this level, which represents the most brilliant phase of the Assyrian Trading Colonies. As the dead were buried in their own houses, burial gifts were discovered as well. Rich with gifts, stone cist-graves are found in all quarters of the city.

The reason for the burning of the city and the identity of its destroyers are not known. The place remained deserted for 40-50 years after the destruction of Level II, when finally, in approximately 1800 BC people of the same origin built city Ib upon the debris. The new city is contemporary built very close together. The plans are more spacious and the number of rooms has been increased. The number of houses with wide rooms and with large store-rooms is considerable. In spite of the fact that there are few written documents, this level enjoyed at least as much prosperity as Level ll. It was likewise destroyed in a great fire. However, as the use of wood as a building material was less common here than stone, the destructive force of the fire was diminished. On both levels, the Karum was surrounded by a city wall, with a diameter of no less than 2000-2500 m. After its second destruction, the importance of the Karum of Kanesh entirely waned; it was abandoned as an area of inhabitation and was left in ruins. With the end of this settlement, the Assyrian language and cuneiform script ceased to be used in Anatolia.

During the Age of the Assyrian Trading Colonies, the Anatolian people not only mastered the foremost invention of human history, namely writing but also established connections with the Mesopotamian civilization, which constitutes the basis of all ancient civilizations. In this manner, the indigenous people of Anatolia found a means to develop their way of thinking, their philosophy of life and their art. Through contact with and assimilation of ancient Mesopotamian art, a new Anatolian style came into being, which is called Hittite Art by archaeologists. After the Karum area fell into decay for obscure historical reasons, the habitation of the mound continued.

The Settlement of the Autochthonous People

The mound was inhabited from the 14th millennium BC on, that is from the Chalcolithic Age to the end of the Roman period. With its spacious buildings, its large alabaster idols, fashioned into a single body and many heads, its statuettes, either clothed or naked, and its painted pottery, it was one of the most important sites of Anatolia in the Early Bronze Age, especially in the late phase (2500-2000 BC). At Kanesh, which was the capital of the Kingdom of Kanesh during the Age of Assyrian Trading Colonies princes lived on the mound, within the city walls in great palaces which have been unearthed during excavations. Still intact, the palaces form a great complex, possessing wide courts faced with stone, large halls, long corridors and suites used by the princes, and for the administrative functions of the kingdom.

After the Assyrian Trading Age, the site lost much of its political and economic importance and was unable to re-achieve the status of a great center during the Old Hittite or Hittite Imperial periods.

During the Neo-Hittite Age, from 1000 BC, Kultepe was one of the foremost cities of the country called the Kingdom of Tabal by the Assyrians. However, the city was considerably destroyed during the Hellenistic and Roman ages; consequently, it has not been possible to find traces of palaces, decorated with sculptured slabs, the existence of which we know. In spite of this, sculpture, painted pottery and seals have been discovered in sufficient abundance to indicate the Hellenistic and Roman Periods, Kultepe was one of one of the most important cities of Cappadocia despite its closeness to Kayseri.

The first excavation of the Kultepe mound was started by the French explorer, Ernst Chantre, in the years 1893-1894. He was succeeded in 1906 by H. Winckler, the discoverer of the Boğazköy archives. B. Hrozny, who made a great contribution to archaeological knowledge by deciphering Hittite cuneiform script, performed the first excavations at Karum in 1925. Unfortunately, the excavations were not carried out systematically, as their sole objective was to discover tablets and thus caused a great deal of destruction. The first systematic excavations of the mound and of the Karum and area were begun under the auspices of the Turkish Historical Association and the General Directorate of Antiquities and Museums in 1948, and have since been regularly continued.