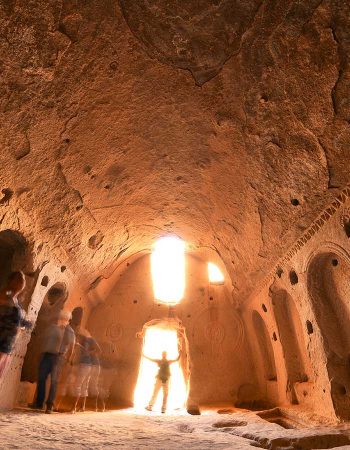 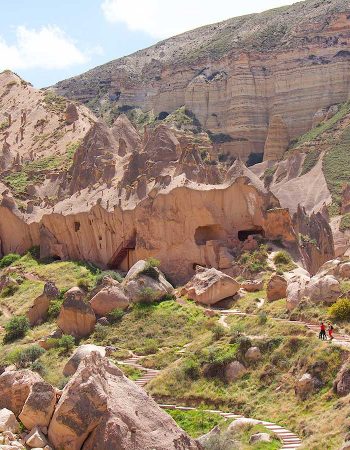 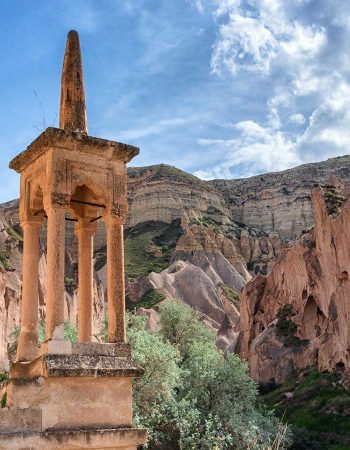 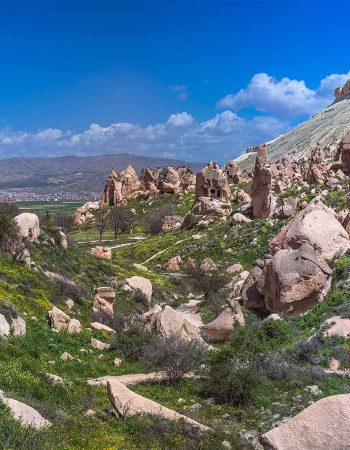 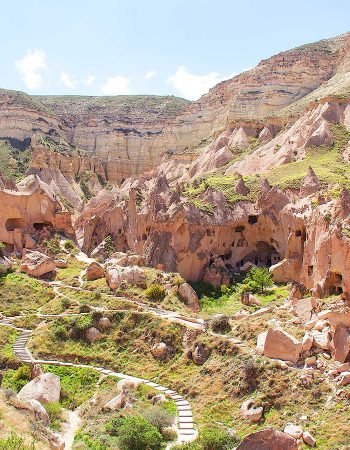 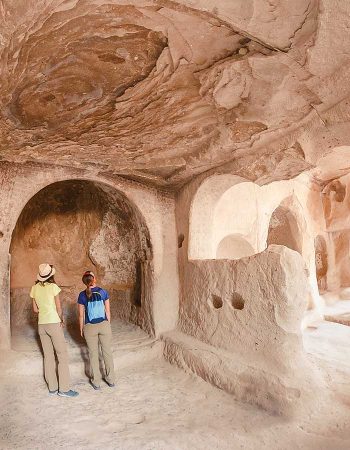 Zelve Open Air Museum, which once housed one of the largest communities in the region is an amazing cave town, honeycombed with dwellings, religious and secular chambers. Here, the Christians and Muslims lived together in perfect harmony, until 1924. Then Christians had to leave the Valley because of the exchange of minorities between Greece and Turkey, and the Moslems were forced to evacuate the Valley in the ’50s when life became dangerous due to the risk of erosion. They left the site to set up a modern village, a little further on, to which they gave the name Yeni Zelve (New Zelve). Now old one is rather a ghost town and the erosion still continues.

The three valleys in the Zelve complex are a paradise for the rock climbers. It takes at least two hours for a good trekker to walk through these valleys, which also house the oldest examples of Cappadocian architecture and religious paintings.

On entering the first valley you will see a rock-cut mosque on the left, with a lovely minaret obviously influenced by the bell-towers of the monasteries, (Byzantine ciboria) which consist of a baldachin of four colonettes supporting a pinnacle. You will then notice a monastery complex on the right resembling an upside-down bowl cut of the rock. Immediately opposite, there is a rock-cut complex accessible by a metal ladder and connected to the second valley by a tunnel, but safety considerations make any attempt to go through it inadvisable. On leaving the first valley you can enter the second valley by following the path in front of the Mosque.

Before leaving this open-air museum, be sure to pay special attention to the rocks at the entrance of the third valley. Here you will find a rock-cut mill with a grindstone which remained in use until the ’50s. Recently, its entrance has collapsed. Then follow the path to the Uzumlu Kilise (The Church with Grapes) named after the bunches of grapes, a symbol representing Christ himself, in a country famous for its Dionysiac rituals. Just next to Uzumlu Kilise is the Balıklı Kilise (The Church with Fishes). On the apse above you will be able to discern paintings of fish in a very faded red.

The nearby Pasabag Valley contains some of the most striking fairy chimneys in Cappadocia with twin and even triple rock caps.

Q Do you need a guide to tour this place?

The museum can be visited without a guide, yet best toured with a professional guide.

Q Do Public Transport Get to Zelve?

There is public transport (local dolmus) from Avanos or Urgup towns.